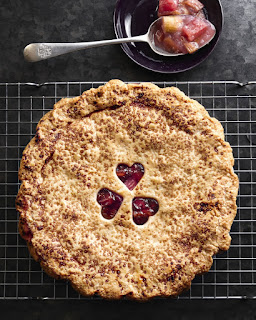 It's revolutionary because, unlike other rhubarb-only pies, this one's going to be especially juicy. Amy Emberling, who wrote the cookbook Zingerman's Bakehouse stopped by Tonia's Kitchen to talk about her recipe for Just Rhubarb pie. This She told Tonia to sugar the rhubarb the night before. Doing so helps "sweat" the rhubarb, and yields juice. Amy says you take that juice and cook it with corn starch. This allows the rhubarb to stand on its own in the pie and makes for something especially flavorful, in fact even more so when combined with the recipe's butter crust! A tip from Amy, use locally grown rhubarb. 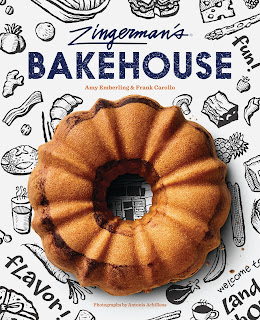 1. In a mixing bowl, combine the rhubarb pieces and granulated sugar. Cover and refrigerate overnight.

2. Drain the liquid from the rhubarb into a saucepan. Put the salt and cornstarch into a small bowl. Remove one-fourth of the total liquid from the saucepan, and gradually pour it into the cornstarch, stirring to make a slurry.

3. Bring the remaining liquid in the saucepan to a boil. Stir the slurry into the liquid and simmer until the mixture is clear. Remove from the heat, and add the rhubarb pieces. Cool to room temperature.

5. Roll out the dough for the bottom crust (page 63), and fi t it into a 9-in [23-cm] pie pan. Add the cooled filling to the unbaked pie shell. Make the egg wash by beating together the egg, egg yolk, and water, and brush the edge of the dough lightly.

6. Roll out the top crust, and place it on the filled pie. Follow the directions on page 64 to finish the pie crust. Brush the entire top of the pie with egg wash, cut four vents into it, and sprinkle with Demerara sugar.

7. Place the pie on a parchment-lined baking sheet and bake for 45 to 50 minutes. The pie is done when the juices are bubbling in the center and the crust is a dark golden color. Remove from the oven and let the pie cool to room temperature before serving (this will allow the juices to thicken).

1. Cut the cold butter into 1⁄4-in [6-mm] cubes. In a large mixing bowl, mix the flour and salt with a fork. Add three-fourths of the cold butter to the bowl. Cut the butter into the flour mixture using a pastry blender, or two butter knives, or your fingers. Cut or work the butter into the flour until the mixture looks like coarse cornmeal. If using your fingers, break the butter chunks down and rub the butter and flour together. Pick the mixture up between your hands and rub your palms together as if they’re cold. This will break down the butter and rub it all over the flour. The flour will take on a creamy yellow color during this step. When you pick the mixture up in your hand, it should be possible to squeeze it into a mass that will hold together. When you see the color change, and the mixture holds together when squeezed, you know that you’ve worked the butter in enough. Work quickly so that the butter doesn’t become warm. The goal of this step is to cover the flour with fat so that the gluten strands are not able to develop. This will allow the dough to be short and tender. It is much more problematic to not break down the butter enough in this step than it is to break it down too much. Most of us don’t incorporate it enough. Try not to be hesitant in this step.

2. Add the remaining one-fourth of the butter and cut it into the mixture as before. These butter pieces should be left pea sized. The chunks of butter will create flakiness in the final pie crust—when they melt during baking, they will create steam, which separates layers of the coated flour, making flakes of crust.

3. Create a well in the center of the mixture. Add the chilled water. Using a fork, blend the water into the flour mixture. The mixture will still be crumbly in the bowl, but it should look moist. If it still looks dry, add an additional 1 to 2 Tbsp of water, until the mixture looks moistened but still crumbly.

4. If the butter has been rubbed into the dough adequately in step 1, the amount of water specified should be adequate. More water is usually necessary only when the butter has not been adequately distributed. It’s not desirable to add more water, because it tends to make a tougher crust.

5. Turn the mixture out onto a clean, unfloured work surface, form it into a mound, and push out sections of dough across the work surface with the heel of your hand. We call this “schmearing.” Push each section of dough once, not twice. Make sure to schmear enough so that the dough loses its dry, crumbly appearance. At the end of the schmearing, all of the pie crust will be pushed out flat on the work surface.

6. Fold the dough back onto itself with a bench scraper. Gather it into a ball, pressing it firmly so it holds together.

7. Cut the dough into two equal pieces, shape each into a disk, and wrap with plastic wrap. Chill for at least 1 hour before rolling it out.
Tip: The dough can stay in this form in the refrigerator for up to 5 days. It can also be frozen, well wrapped and preferably in an airtight container, for up to 3 months.

Roll Out a Single-Crust Pie Shell

1. Remove one piece of the chilled dough from the refrigerator. While the dough is still in the plastic wrap, firmly but gently tap on it with the rolling pin until it is flexible but still cold. Lightly dust the work surface with flour. Place the disk of unwrapped dough on the surface and lightly flour the top of the disk with flour.

2. Using a rolling pin, start rolling the dough from the center to the edge, away from you. Do not use too much pressure or the dough will crack.

3. Stop and give the dough a one-eighth turn. This rotation will prevent the dough from sticking to the work surface and will help make a perfect circle.

4. Reflour the work surface and the top of the dough to prevent the dough from sticking. Continue to roll and rotate the dough until it’s about 1⁄8 in [4 mm] thick and about 1 in [2.5 cm] bigger than the pie plate you will be using. Flour is your friend in this process. Use it liberally to avoid sticking.

Fit the Dough into the Pie Plate

3. Create a decorative edge with this border as you choose. A simple finish is to press the tines of a fork all around the edge or to press a spoon into the edge to make semicircles.

4. Now follow the directions in the specific pie recipe. The crust will either be used raw or blind baked. Blind-baking instructions are given next.
Tip: If you are not going to use the crust right now, wrap the unbaked crust well and it can stay in this form in the refrigerator for up to 5 days or in the freezer for 3 months.

2. Roll out a single pie crust and fit it into the pan, as just described. Dock the dough all over. This means to make tiny holes in the bottom and sides of the dough with a fork. All of these holes will allow the gas from the melting butter to escape without forming large air bubbles in your crust.

3. Refrigerate or freeze the pie shell for at least 20 minutes before baking. Remove the chilled pie shell from the refrigerator. Line the chilled crust with parchment paper, pressing it snugly against the bottom and sides. Fill with dried beans or pie weights to hold down the parchment.

4. Bake the crust for 25 minutes, or until the edge begins to color. Remove the parchment and the beans. Bake for another 5 minutes. At this point the pie shell is considered partially blind baked. For a fully blind-baked crust, bake for another 12 to 15 minutes after removing the parchment.

3. Using the second piece of pie dough, roll the top crust out slightly larger than the top diameter of the pie plate, so that it will comfortably be able to cover your filling.

4. Roll up the top crust onto your rolling pin and, starting at one side of the pie, gently unroll the crust over the filling. If you do not place the crust perfectly, just move it gently with your hands to make it as evenly placed as possible. Trim the crusts, leaving 1 in [2.5 cm] of excess to form the border.

5. Now it is time to seal the edges. Fold the excess dough from the bottom crust over the edge of the top crust and seal by lightly pressing both layers together with your fingers against the top of the pie pan. Decorate the edge as you like. There are many different decorative edges to choose from. You can do a simple one by pressing the tines of a fork all around the edge of the pie. You can also press a spoon into the edge to make semicircles. Or you can pinch the dough with your fingers to make the classic fluted edge. Now cut at least four 2-in [5-cm] vents in the top of the crust at even intervals to allow the steam to escape as the pie bakes. Follow the directions for baking in the recipe of your choice.