A Spicy Take on Pumpkin Pie 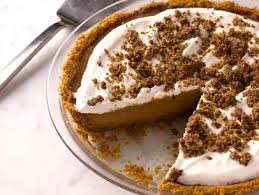 LISTEN TO THE PODCAST
Thanksgiving is almost here, and Pumpkin Pie is always a welcome tradition at the holiday dinner table. And this being Tonia's Kitchen, you know we couldn't leave a tradition well enough alone.  Famed Food Network chef Bobby Flay stopped by to tell Tonia about his delicious take on the pie, specifically Pumpkin Pie with cinnamon crunch, with bourbon-added whipped cream and maple syrup.  It's enough to make me very hungry! 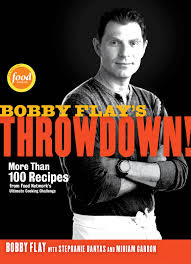 Bobby, who wrote Bobby Flay's Throwdown says he starts the pie with a crust made out of graham cracker crumbs, butter, cinnamon and eggs.  He then fills the pie with pumpkin puree, ginger, nutmeg, cloves, sugar, eggs and cream.  Chef Bobby bakes it slowly, then adds the crunch.  That's made out of flour, rolled oats, cinnamon sugar and butter.  That goes on top of the pie filling.  Then take whipped cream mixed with bourbon and maple syrup and top it all off!   The pie could make you scream Hey Bobby Flay!

To make the cinnamon crunch, preheat the oven to 350 degrees F.
Combine the flour, oats, muscovado sugar, and cinnamon in a food processor, and process a few times to combine. Add the butter and pulse until combined. Pat the mixture evenly into a 4-inch square on a parchment-lined baking sheet. Bake until golden brown and crisp, about 15 minutes. Remove and let cool. Transfer to a cutting board and chop into small pieces. Keep the oven on.
To make the crust, combine the graham cracker crumbs, butter, and cinnamon in a bowl and mix until combined. Press evenly onto the bottom and sides of a 10-inch pie plate. Brush with the beaten egg. Bake until light golden brown and firm, about 12 minutes. Remove from the oven and let cool on a wire rack.
Reduce the oven temperature to 300 degrees F.
To make the filling, whisk the eggs, egg yolks, both sugars, and the molasses together in a medium bowl. Mix in the pumpkin puree, cinnamon, ginger, nutmeg, cloves, and salt. Whisk in the heavy cream, milk, and vanilla seeds or extract. Strain the mixture through a coarse strainer into a bowl. Whisk in the butter.
Place the pie plate on a baking sheet, pour the pumpkin mixture into the shell, and sprinkle additional cinnamon over the top. Bake until the filling is set around edges but the center still jiggles slightly when shaken, 45 to 60 minutes. Transfer to a wire rack and cool to room temperature, about 2 hours.
Cut the pie into slices and top each with a large dollop of whipped cream and some of the cinnamon crunch.
Combine the cream, vanilla seeds, maple syrup, and bourbon, to taste, in a large chilled bowl, and whip until soft peaks form.